As with legendary houses from television programs, famous places which we see in the movies become immortalized as well — but although movies are a form of entertainment which provide a temporary escape from reality for us, what if you could actually visit those places and have an experience in them which would create an impact in real life for you?

Movie scenes are often set in real places in which you can do much more than merely visit — but imagine spending a night of your life inside any of those places. Take a trip beyond the confines of your living room or local theater and spend a night in a place you thought you could only visit virtually via the screen in a theater or on a television.

A series of graphics which celebrates ten of the most iconic places in the world which are featured in the movies gives a visual compendium of their generic and individual features; and this article — which was written for Reservations.com and from which this article originates — gives more details about them. 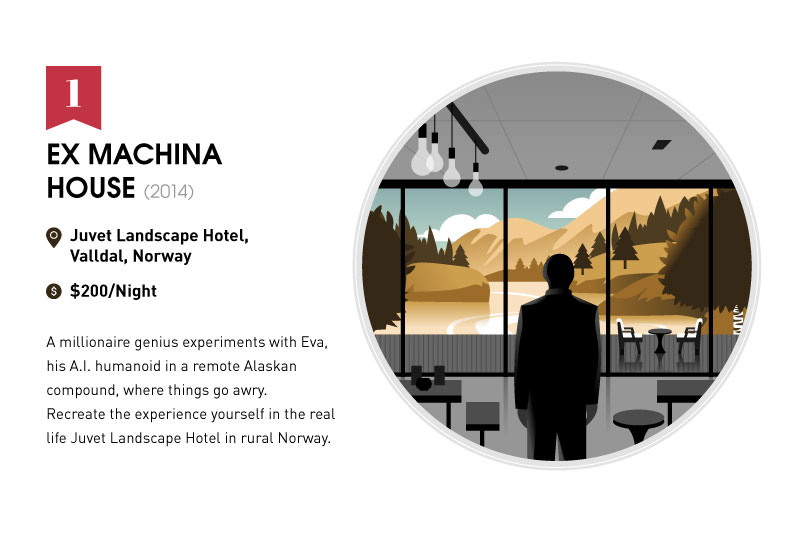 Hiding a beautiful, advanced humanoid robot in the ruggedly beautiful Norwegian wild, the secret mansion of this movie’s millionaire antagonist is a modernist dream stuck right in the middle of pure wilderness. Careful cinematography reveals a single home with stunning floor to ceiling windows, however what looks like a home is actually one of 9 detached hotel rooms that can be booked by guests at any time.

Rest assured, you won’t find a jaded, lonely robot cutting the power and toying with your mind. Ex Machina feature on hotel site. 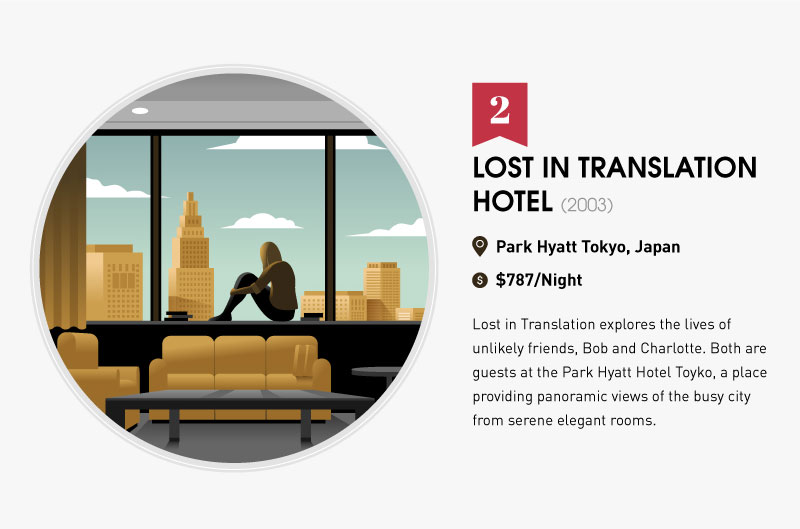 Stuck in Japan, lonely and a bit lost in the world, Bob and Charlotte are brought together at the bar of the Park Hyatt Hotel. This hotel exists both in the movie and in real life. You can stay at this exquisite hotel to catch a glimpse of the incredibly stunning city views and also experience quintessential Japanese omotenashi (hospitality). If you decide you might like to meet someone while you’re there, we suggest visiting the bar.

Omotenashi is more than just hospitality. There’s no direct translation, but a good summary includes both acting selflessly from the heart and, most importantly, anticipating the needs of others.

3. The Lord of the Rings and The Hobbit Trilogies Homes — Matamata, New Zealand 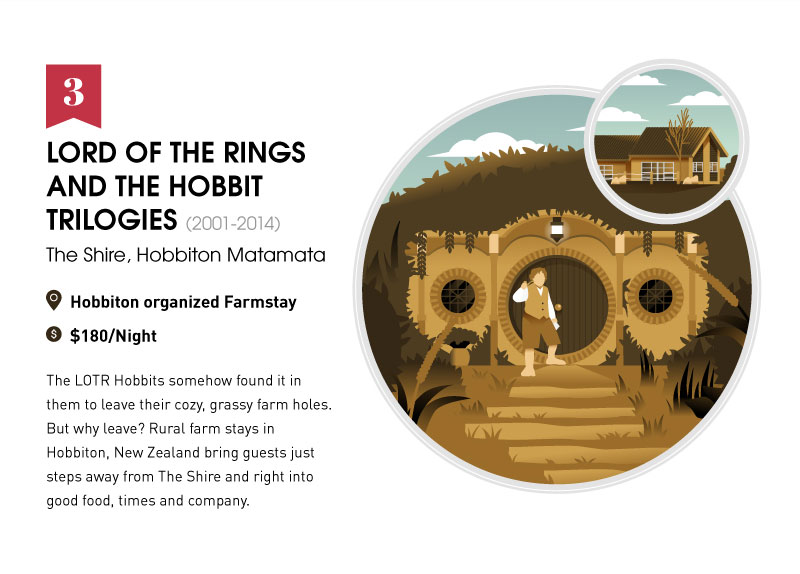 Fans of the J.R.R. Tolkien film series can take a trip to New Zealand, where much of Middle Earth was filmed. Take a few nights visiting The Shire where you will receive a hobbit-like welcome at one of the local farm stays which include a taste of the local fare and where you will have easy access to Bag End and other hobbit holes used for filming.

If you’re looking to stay in a more hobbit-y hole (in-ground) search “Hobbit Hole” on Google. It won’t disappoint. 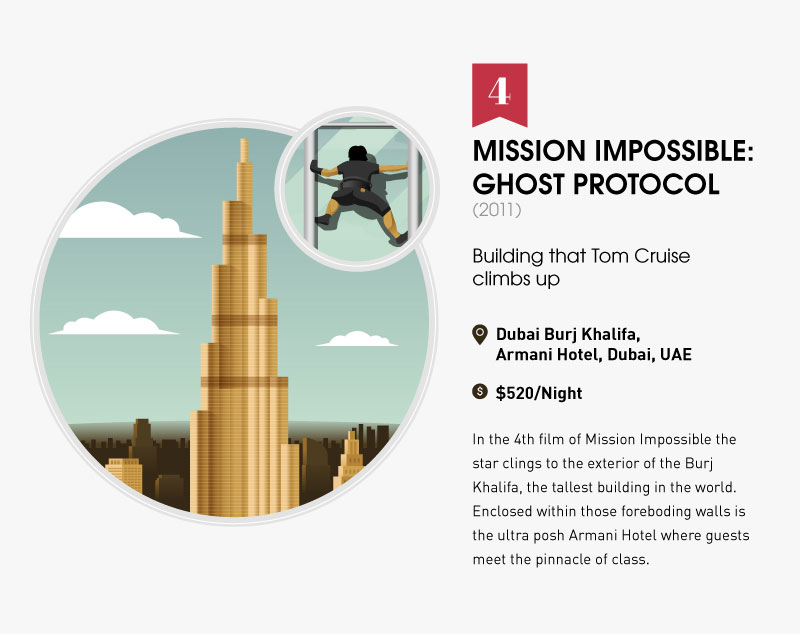 The defining scene from this movie includes aerial shots revealing how dangerously high up Tom Cruise was during his movie’s most nail-biting stunt while demonstrating the towering height of the Burj Khalifa. Fans can visit this skyscraper and stay within its mirrored walls at the exclusive Armani Hotel. It’s just what you’d expect, a seamless blend of luxe and class with an elevated standard of service so guests truly feel they are staying within the walls of the world’s tallest building. 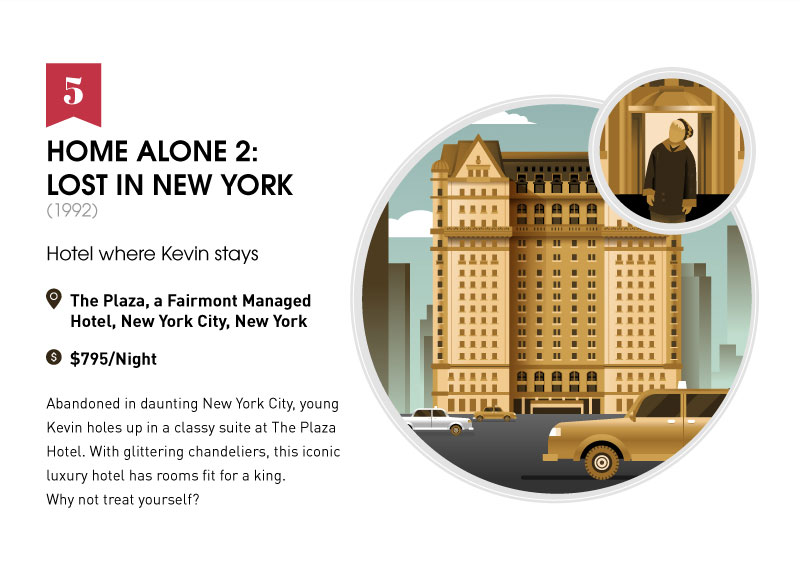 Handing out pieces of gum to tip the concierge is not recommended; but definitely stay in this New York City hotel next time you are in town to relive the glory of one of our favorite Christmas classics.

If you happen to have a stack of credit cards without limit, you can recreate Kevin’s luxurious stay at The Plaza and feast on loads of ice cream.

Don’t forget the iconic cameo of THE Mr. Trump with his remarkably helpful, “Down the hall and to the left.” 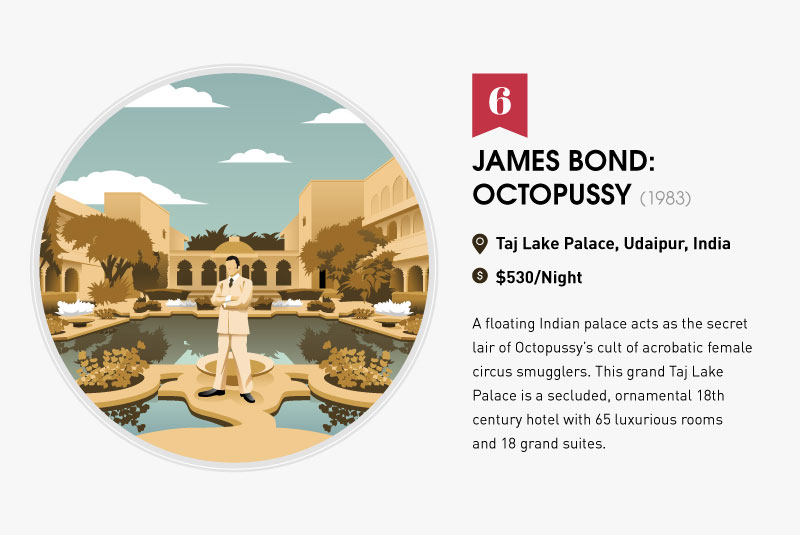 Avid Bond fans might recall the enchanting, floating palace from this lighter and more playful film capturing the antics of agent 007.

The exquisite haven actually sits on 4 acres of land in the middle of Lake Pichola. Don’t worry, there aren’t any snapping crocodiles in the surrounding waters, but there is only one way to the Palace: via their exclusive first class boat service.

The title character, Octopussy, was the first female villain in the entire Bond Film Franchise. Of course, it didn’t take long for her to switch sides and succumb to the charm of Mr. James Bond. 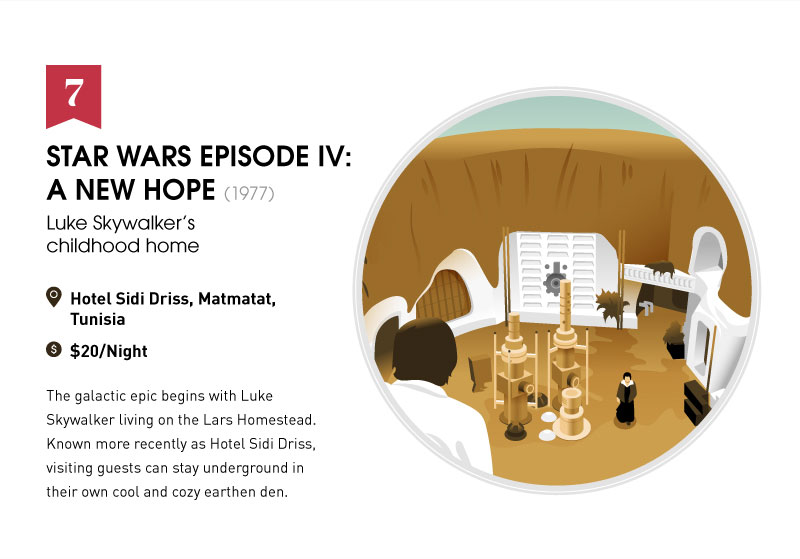 In a galaxy not so, so far, far away you can imagine life as a young jedi in Matmata, Tunisia. This location served as the setting for the Lars Homestead in the Star Wars film series and now the small cave-like rooms of these “troglodyte” (cave-dweller) structures offer cool, earthen walled spots for guests to rest.

Make sure to grab some cash well ahead of your arrival to this practically off the map destination. Last we checked, there are no credit cards accepted or ATMs nearby.

If you are into the quiet, rustic magic of age old stone and long to wander in dark, corridors of an actual school (free of guided tours and fanfare), visit this school that not only inspired Hogwarts but also served as a filming location for a number of scenes. Get a real feel for how Harry must have felt walking along Hogwarts’ dimly lit corridors by exploring the campus in the middle of the night once the school is closed for the day.

The rooms at the school are only available when student dorms are vacant, so you generally can only stay here during off months such as summer or Easter break. 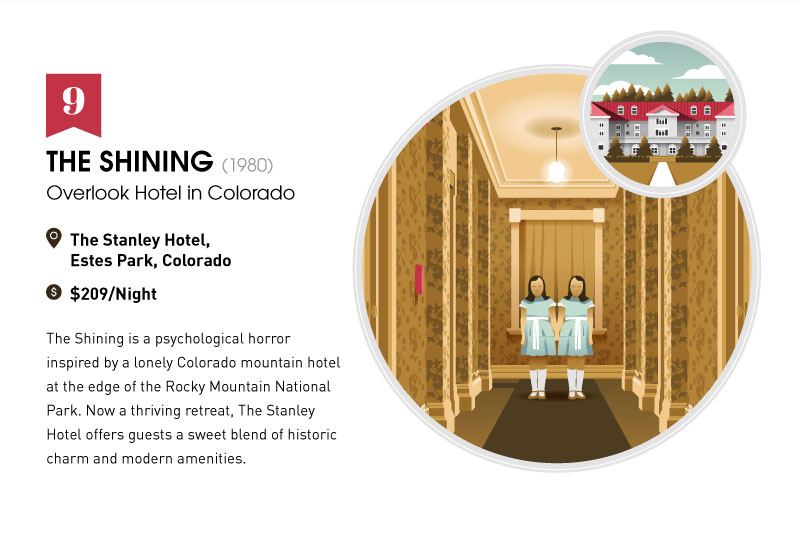 Stephen King and his wife stumbled upon the Stanley Hotel as it was about to go out of business. In a wild, desolate spot, the once beautiful hotel was in disrepair and disuse. The couple spent a single night in the deafeningly quiet hotel. That short stay included a terrible nightmare resulting in the inspiration for The Shining. Now the hotel is a huge success and guests can explore the possibly haunted, completely renovated and stately 142 room hotel.

If you dare, you can stay in one of the “Spirited Rooms.” These rooms are said to have a high level of paranormal activity and are in demand by many guests. Sweet dreams… 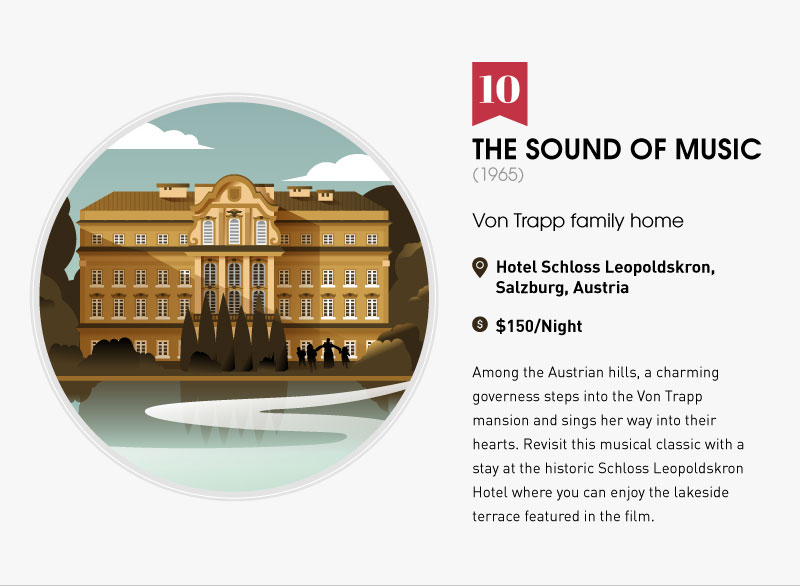 What better place to hum the tune of These Are A Few of My Favorite Things other than while staying in Austria at this historic hotel known largely for its exterior walls fronting as the Von Trapp Palace in this classic musical. With incredible, breathtaking mountain views and meticulously kept garden grounds, you can breathe in the fresh air from those musical hills and receive first rate service in one of the most simply stunning parts of the world.

The palace interior also includes the opulent “Venetian Room” transformed for the marionette theater scene and the ballroom scene, both featured in the film.

Yes, many more famous places from movies at which you can stay overnight are missing from this article and are not represented here — but if you are interested in staying overnight at any of the places which are featured in this article, you can access links to them either through here or at Reservations.com and book your reservations.

You can also book reservations at 16 former prisons for as few as 15 euros per night.

Please click here for a detailed review of the At The Top experience at Burj Khalifa. Photograph ©2015 by Brian Cohen.